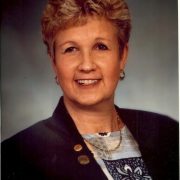 Susan O’Boyle Jacobson, of MN, joined ICES March 1, 1979. She served as her state representative, Show Director in 1998, served two terms on the ICES Board of Directors and was elected as our ICES president in 1985 and again in 2001. Always an eager demonstrator she made her students feel like the world was at their feet and the door was wide open. For over 30 years Susan taught, mentored and judged cake shows. She spent several weeks in Russia working with local bakers teaching new techniques to make their work more efficient. She never stopped, she was always working towards sharing her knowledge and wrote countless articles, which were featured in publications around the world. She even wrote an article about how to conduct a successful demonstration, which is still used today. Susan whole heartedly promoted the sugar arts thru classes, demonstrations, books, and television. Her most exciting achievement was winning the Food Network Candy Castle Challenge Show in 2010. Susan was overwhelmed with pride and joy, she passed away two days later. Later that year she was inducted posthumously to the ICES Hall of Fame for all her heartfelt sharing and caring.  Susan was a warm, funny, wonderfully talented lady loved by all who crossed her path.